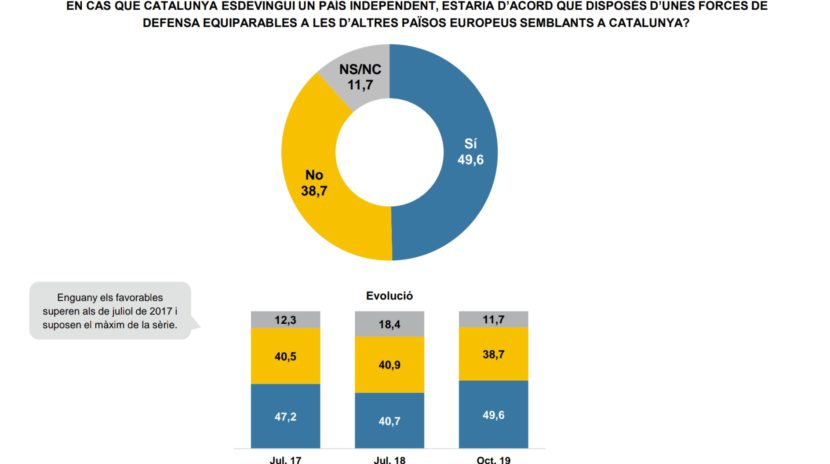 This year the Military Studies Society (SEM) ordered for the third time the survey on the defence policy of Catalonia. As the other times, GESOP has carried out 1,605 interviews with people from all over the Principality of Catalonia. We can announce that a majority of Catalans agree that Catalonia should have defence forces in case it becomes independent.

Let’s see so, the detailed results for everyone of the questions

1 – IN THE EVENT THAT CATALONIA BECOME AN INDEPENDENT COUNTRY, WOULD YOU AGREE TO HAVE DEFENCE FORCES COMPARABLE TO THOSE OF OTHER EUROPEAN COUNTRIES, SIMILAR TO CATALONIA?

It is also remarkable the determination of foreigners regarding respondents with Spanish nationality. In both collectives the Yes wins, but among foreigners the difference is 27.9% while among the others is 9.6%. The Yes to defense forces also win regardless of the language preferences or the level of studies.

At the same time, in the left-center-right axis wins the Yes, with no exceptions, but with the greatest advantage among center and right-voting respondents. Regarding the sense of belonging, in an arc ranging from only Spanish to Catalan only, rejecting defence forces won only among those who feel only Spanish.

2 – IN THE EVENT THAT CATALONIA BECOMES AN INDEPENDENT COUNTRY AND HAVE DEFENCE FORCES, DO YOU AGREE THAT ONE OF THEIR FUNCTIONS SHOULD BE TO CONTRIBUTE TO INTERNATIONAL PEACEKEEPING OPERATIONS?

As in previous surveys, those who agree to contribute in international peacekeeping operations win with a big margin. Specifically, they are 73.4% in favor that contrasts with only 17.3% against. There is a great consensus in this field, regardless of sex, age, feeling of belonging or the voting record: in most cases those favoring this option win by more than 50 points.

3 – IN THE EVENT THAT CATALONIA BECOMES AN INDEPENDENT COUNTRY, DO YOU AGREE TO JOIN NATO?

Three years in a row making the survey of defense policy allow us to establish certain patterns.

Firstly, the Catalan society would be in favor of giving itself equivalent defence forces to those of other countries in Europe. The negative topics, with respect to the Catalan attitude towards the defence, can be plainly rebuked with data.

There is a great consensus regarding the participation of possible Forces of Defense of Catalonia in international peacekeeping operations. Something that shows the solidarity vocation, just like responsible, towards a more secure and peaceful World. In other words: an independent Catalonia would not only send humanitarian aid to zones in conflict, it would also take on the necessary risks to keep and enforce peace.

The favorable results regarding joining NATO would emphasize the will to take over the commitments inherited by Catalonia as a successor state. Something especially important if you are trying to send a message of responsibility to those countries whose recognition is awaited.

In short, the awareness of the Catalans (and especially of the independentists) about what it represents to be a State, is fully consolidated. It is the responsibility of those who want to regain sovereignty to act accordingly.